With around 12 staff members spread across five offices in Melbourne and regional Victoria, TBA Lawyers are a small firm that was facing big problems with their IT.

After already trying two different IT hosting providers, the team at TBA were no closer to stress-free IT. While they appreciated the flexibility the cloud solution offered, the first provider ran out of server space, and when they tried to fix it the quality dropped significantly.

The second became an issue when TBA Lawyers switched to NBN. Suddenly their Practice Management System started hitting slow periods and continued to worsen until it was slowing down every single afternoon. This went on for 18 months.

“It got progressively worse and downtimes became a daily event. People were pulling their hair out!” – Jacquie Brauman, Principal

Not willing to accept that their firm couldn’t escape the inefficiencies of poor IT, the TBA team decided to try lucky number three, and went about finding a new IT provider.

Refusal to settle on anything but perfect

Having been through it before, they knew what they wanted and needed in their next IT provider:

While attending the Future of Law Conference, TBA spotted Innessco’s display booth and stopped to find out more. As a result of this conversation, TBA added Innessco to a list of three other recommended providers to investigate further.

The more TBA Lawyers spoke to Innessco, the more Innessco stood out from their competitors, impressing the firm with their:

“Salespeople at Innessco were responsive and provided more information about technical specification than others.” – Jacquie Brauman, Principal

It made the choice pretty easy, and TBA Lawyers committed to trying to fix their IT for the third time, putting their faith in the Innessco team.

A smooth and simple change over

The change-over was the first great sign for TBA, who experienced a stress-free transition.

“The changeover happened over a weekend.  We came back to work and there were no issues at all.” – Jacquie Brauman, Principal

The only problems they faced were with their external providers, including their NBN and photocopy providers, but they were thankful for Innessco’s patience, close support and communication while they sorted everything out.

The result? An IT service that was just right

The quick and painless changeover meant they could get back into work straight away, and immediately noticed a range of improvements and advantages:

TBA Lawyers no longer have to struggle with limited server space, slow systems or extended downtime. They have quick and easy access to all their documents at any time, from anywhere.

Innessco offers 24/7 support with a quick and easy elevation process. TBA staff can contact them at any time and be sure they’ll be speaking with someone who knows the business and their systems.

“Innessco’s support is great! We probably rely upon them too much to be honest… I think they might want us to call less!” – Jacquie Brauman, Principal

By implementing a hosted desktop, they are able to use a server-based software, rather than a web-based. This allowed TBA to keep their PMS, while integrating it with Microsoft office to deliver further value. Offering them the advantages of cloud computing with the benefits of a fully-featured application.

By using a hosted desktop, they’ve also been able to improve their service offering to clients, by integrating other applications to their environment. TBA is using an app to allow clients to confirm appointments via text, all run through their computer systems.

Jacquie acknowledged that switching up IT can be scary, especially when you’ve already been burnt. For lawyers who are so short on time, it can seem easier to just tolerate a bad system, rather than take the time to find something better.

But she’d agree the time it took to find the right provider was more than worth the benefits they received in the long run. If you don’t have the time or the knowledge, find a provider that does.

If you are similar to TBA Lawyers and are looking for an IT service that’s the perfect fit for your firm, you might benefit from a discussion about your options for your IT.

To find out your options, you can contact Innessco here, or give Innessco a call on 02 7200 4400 or email robert.cox@innessco.com.

Alternatively, you can get a comprehensive idea of how well your firm’s IT is performing by heading over to innessco.com/evaluation-tool/ and taking the quick survey. 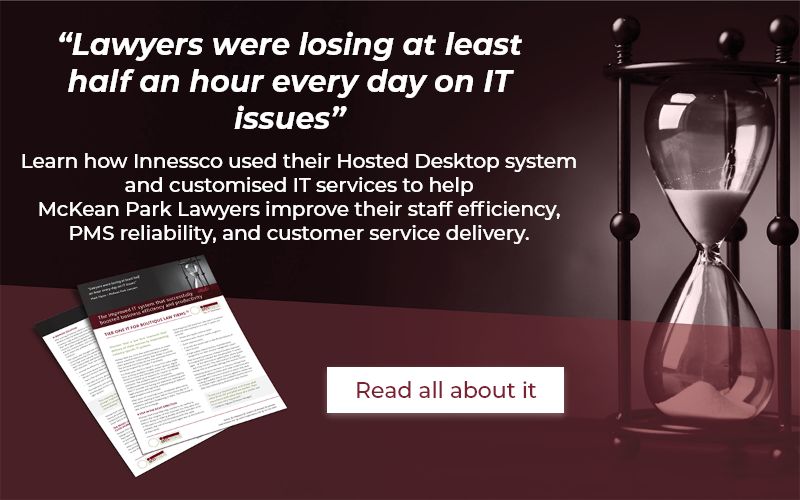